THERESA MAY took aim at European leaders insisting Britain would not pay a Brexit divorce bill upfront, as the EU has demanded. 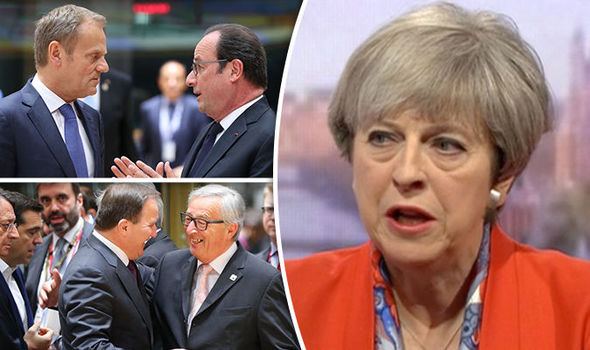 The Prime Minister claimed the UK will not pay the EU the Brexit divorce bill until the end of negotiations with the bloc.

European leaders agreed in unison on Saturday at a summit that the UK should pay the Brexit divorce bill upfront, before a trade deal is negotiated.

Speaking on The Andrew Marr Show, the Prime Minister rejected the claim that Britain would be forced to pay a divorce bill to the bloc upfront.

She said: “What they are very clear about is yes they do want to start some discussions about money.

“I’m very clear that at the start of the negotiations we have to be very clear not just about the Brexit arrangement, the exit, how we withdraw, but also what our future relationship is going to be.

“These negotiations are going to be tough.”

Marr quizzed the Prime Minister, asking whether she would be “prepared to agree on the money” before anything else is agreed.

Sidestepping the question, Mrs May claimed the UK would “agree on a trade deal and our withdrawal arrangements so that we know what both of those are when we leave the European Union.”

As Marr pushed for a clear answer, Mrs May rejected the notion the UK would agree the Brexit divorce bill first.

She said: “No, if you look at what is being said in the guidelines, they say that they want to start the discussions on a number of issues.

“They also agree, if you look at the guidelines that we should be discussing the development of a special partnership for the future.”

The BBC host asked the Prime Minister one final time for a definitive answer on whether the UK would pay the Brexit divorce bill upfront.

He said: “I understand all that but it is absolutely critical to this issue and to the election campaign. You are saying that you do not agree to paying a large bill to the EU until the entire negotiations are finished, yes or no?”

The Prime Minister backed down suggesting the EU would have to wait until the end of Brexit negotiations before they receive the UK’s divorce settlement.

The EU is adamant it will not hold trade talks with the UK before it has received satisfactory guarantees on EU expatriate rights, the Ireland question and Britain’s “Brexit bill”.

EU officials estimate the UK faces a £50billion bill under EU budget rules but UK politicians have said the Government will not pay the sum.

Speaking after Saturday’s summit, Mrs Merkel refused to be drawn on numbers, saying: “No sum was discussed. We will have to talk to the British first, find out things such as what they will put in the coffers on research”.

French president Hollande added that there would inevitably be “a price and a cost for the UK”.

We are in a chaotic situation where everybody is running in different directions, and new threats are looming on the horizon every day.

It is important that we keep our composure and concentrate on one thing at the time in order of their importance. Start at the trunk of the tree and work the branches,one by one and finally the leaves.

We need another Turing to solve the EU enigma.
Life is not about avoiding the storm but learning to dance in the rain!