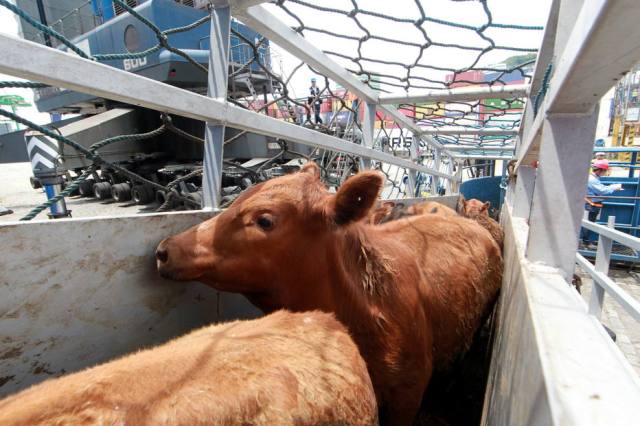 
The sale of live cattle by Brazilian slaughterhouses gained the spotlight at the beginning this month when two non-governmental organizations have reached court rulings that prevented a ship carrying 25,000 animals from traveling to Turkey. The vessel was eventually released as a result of an appeal by the federal government. The case shed light on a sector that has been growing around 20% a year and has become a revenue alternative for cattle ranchers and food companies, such as Minerva Foods.

Entities linked to animal welfare, however, intend to continue trying to bar the activity. Although the sale of live cattle is an old practice, this segment of cattle ranching gained strength at the beginning of this decade, when foreign sales reached 690 thousand animals. From 2010 to 2012, the main destination of the Brazilian oxen was the slaughterhouses of Venezuela. With the severe economic crisis of the neighboring country, sales plummeted in 2015.

To make the business viable, ranchers found a new client: the Islamic religion market. By 2016, sales have soared to $ 263 million by 2017, according to the Ministry of Development, but still far from the heyday in volume (see chart). Animal Movement Exports of live cattle are growing in Brazil, which today is the fifth largest market in the world in this sector. It is a little relevant in the face of annual slaughtering in the country, which totals between 35 million and 40 million head a year, says César Castro Alves, livestock analyst at MB Agro. The 1% share of slaughterings, according to the specialist, should not rise significantly, as the global market for live cattle does not grow significantly - the total number of cattle is stationary at about 5 million head a year. "It's a niche fueled by religious issues.

It may be a good option when prices are bad, because selling live cattle does not add value to the product, "says Alves. Target. Although the market as a whole does not grow, both business owners and the US Department of Agriculture (USDA) predict 20 to 30 percent increases in Brazilian exports by 2018. Minerva Foods, owner of the cargo that was retained in Santos, of 40% of sales of live animals - segment in which the leaders in cattle in Brazil, JBS and Marfrig, do not act. Wanted, Minerva did not give an interview. One explanation for the interest in the business is the fact that Muslim countries pay premiums on cattle reference prices.

A source linked to exporters points out that buyers require specific breeds - Nelore cattle, a symbol of the Brazilian stock, are not accepted in Muslim countries, which prefer the Zebu breed. In the face of the demands, it is necessary to raise animals for the foreign sale, which ends up being reflected in the price paid by the buyer. Among the other national companies with a relevant role in the export of live cattle are Mercúrio and Agroexport. To grow, entrepreneurs move to open new markets. 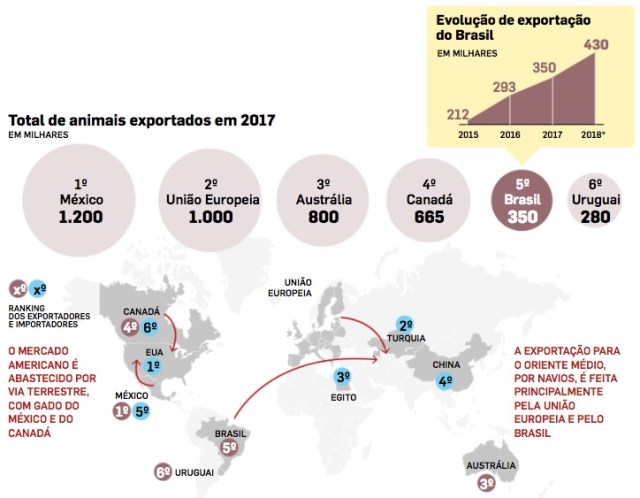 Today, more than half of Brazilian sales are to Turkey. Business missions, however, are already seeking customers in Malaysia and Indonesia - two countries now mostly served by Australia. The assessment is that if the strategy succeeds, sales of live cattle can grow by 50% to 600,000 units per year by 2023. However, entities such as the National Animal Protection and Defense Forum and the Agência de Notícias de Animal Rights (Anda), who have managed to suspend the sale of live cattle for a few days, are not willing to part with the attempt to paralyze the sector. "Our fight is for the respect to the animals, that are not contemplated in the Brazilian export rules, which are limited to sanitary aspects", says Vânia Plaza Nunes, veterinary doctor and technical director of the Animal Forum.

The fight with the fridges is long-term. According to her, new resources to paralyze sales of live cattle will be presented in the coming weeks. Animals travel 16 days to reach the port of destination The export of live animals is carried out by vessels specially designed for this purpose. The larger vessels - most of them developed in Australia, a traditional exporter of livestock to countries of Islamic religion - can carry up to 30,000 animals per trip. It was one of those meganavios that was temporarily stopped at the Port of Santos with 25 thousand oxen at the beginning of the month, by judicial decision.

The transport of live cattle to Turkey - involving the capture of animals from different herdsmen, trucking to the port, boarding, traveling and landing - takes, on average, about a month to complete. Shipment of livestock on the vessel may take five to seven days, depending on the type of truck used for the operation. In caseof cargoes of more than 25,000 oxen, such as Minerva, companies prefer to use double-decker trucks to expedite the process - the practice, however, is prohibited in ports like Santos.

After the ship sails, the trip to Turkey - the main destination of Brazilian animals - lasts about 16 days. Once on Turkish soil, inspection and disembarkation of the cargo extends the operation for another five and seven days. Proceedings brought by nongovernmental organizations led the Federal Justice of São Paulo to schedule an inspection on the ship that remained in Santos. The judicial report detected "very precarious hygiene conditions" and "unhealthy" environment for the animals.

The document will be one of the bases of the appeal that the National Forum of Protection and Animal Defense prepares to present to Justice. "It is an activity that does not add value to the economy and only benefits a few entrepreneurs," says Vânia Plaza Nunes, technical director of the non-governmental organization. "The mortality rate is very high, of 10% of a total of 25 thousand animals," he says. A source close to the exporters said, however, that such an export loss rate would simply make the business unfeasible and scare off buyers. And he stressed that the average death rate would be much lower, of the order of 0.1%. That is to say: about 25 oxen, in a load of 25 thousand, would die during the transport of ship.

The Brazilian Association of Livestock Exporters (Abeg) said in an e-mail sent to the report that there is disinformation regarding the sale of live cattle and reinforced the sector's concern with the conditions of the animals during the export process. "Animal welfare is part of the sustainability of the activity. An ox without welfare causes harm (to the seller), "he said, referring to the notion that an animal subject to high levels of stress can result in a lower quality end product. Return. Leader in the segment, Minerva spoke on the criticisms of environmental entities by means of a note.

"The management of (export) livestock follows all appropriate procedures to preserve the welfare of the animals during transportation, boarding and during the journey to the destination." The company also recalled that the activity is regulated by the Ministry of Agriculture. Wanted, the ministry did not grant interview.
Source: The State of São Paulo.

The transport of live cattle in corral vessels or cow herds will be the subject of the next debate held by the Animal Protection and Protection Commission (CPDA) of OAB / RJ. With the support of the São Francisco de Assis Institute (ISFA), the event will be held next 21st, at 3pm, at the Sectional headquarters.

At the meeting, open to the public, will analyze the legal aspects of this type of action, which generated controversy in February this year, when more than 25 thousand heads of cattle boarded the ship NADA, which was docked at the Port of Santos, on the coast of São Paulo, on his way to Turkey.

At the time, the shipment was delayed because animal protection activists claimed that the oxen were being abused and the Santos Municipality fined the company responsible for cattle in R $ 1.5 million with the same justification and then in R $ 2 million for environmental pollution. The suspension of the embarkation, the landing of the animals that were already on board and the sanitary inspection of the ship were determined.

However, after a report by the Sanitary Surveillance that showed good conditions of transportation, the ship received from the Federal Justice authorization to leave the Port of Santos, in an emergency decision that answered an appeal from the Federal Attorney General's Office (AGU), which interceded in the case at the request of the Federal Government.

The case was just one of many involving the transport of cattle standing in the country. According to the Ministry of Industry, Foreign Trade and Services, Brazil is responsible for 15% of the world market for live cattle exports, having shipped more than 400,000 animals in 2017, up 42% over the previous year.

According to the president of the CPDA, Reynaldo Velloso, it is necessary to analyze the supremacy of the Federal Constitution in relation to the decisions authorizing this type of transport: "The crime of mistreatment in this matter is flagrant. It does not matter if there are authoritative resolutions regarding this model of transportation. I understand that the supremacy of the Federal Constitution must prevail before any normative act, even those authorized by competent ministry, since the protection of animals, members of the environment, is condoned by fundamental rights.

Under this scenario, Velloso, Judge Rosana Navega and Director of Education of the National Forum for Protection and Animal Defense (FNPDA), Elizabeth MacGregor, will present arguments and discuss with the public solutions to the issue, he explains.

Source: writing of the Lawyer's Tribune
Previous registrations can be made by email cpda@oabrj.org.br.
More information by phone (21) 2272-2053.