Making Ayn Rand Relevant in the Era of President Trump 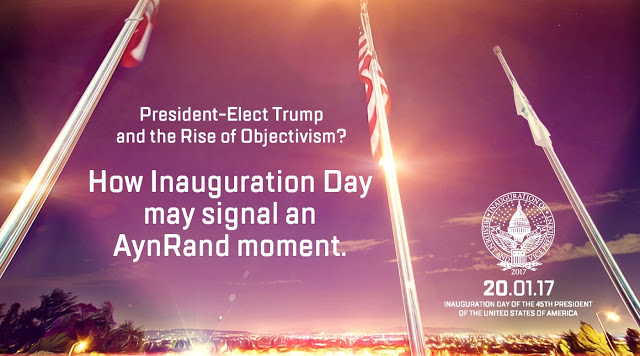 With his inauguration as the 45th President of the United States tomorrow, perhaps it’s time we should. Others -- critics of Rand and Trump -- aren’t shying away from the topic.

Both positions are exaggerated. To be objective, let’s start with perspective.

In 2009 Obama’s aggressive moves on socializing medicine and raising taxes helped spark a resurgence of interest in Ayn Rand. Book sales of the 1957 novel Atlas Shrugged doubled over previous-year averages and Tea Party protesters brandished homemade signs asking “Who Is John Galt?” “Atlas Will Shrug,” and “Free Markets, Not Freeloaders.”

“Ayn Rand is one of those things that a lot of us, when we were 17 or 18 and feeling misunderstood, we'd pick up,” he said. “Then, as we get older, we realize that a world in which we're only thinking about ourselves and not thinking about anybody else….that that's a pretty narrow vision. It's not one that, I think, describes what's best in America.”

Echoing Obama, Hohmann offers the same pseudo-psychological critique levied by so many Rand bashers on the Internet: “The fact that all of these men, so late in life, are such fans of works that celebrate individuals who consistently put themselves before others is therefore deeply revealing.”

More deeply revealing is Hohmann’s choice of language. Hohmann is a talented writer. Calling Trump and others who like Ayn Rand’s books “acolytes” -- a term used in religious ceremony, also synonymous with “minions, henchmen, lackeys and underlings” -- carries the weight of Hohmann’s perspective with elegant economy.

He likens Rand readers to a villain from Dirty Dancing who dismisses a plea for help by flourishing a copy of The Fountainhead.

“Some people count, and some people don’t,” says the bad guy. Adds Hohmann: “In popular culture, the Rand acolytes are that guy.”

If true, Hohmann’s piece, outing three cabinet picks, one advisor, and Trump himself for liking Ayn Rand, is tantamount to calling them selfish jerks, “in popular culture.”

If that were the case, one would expect the outed “acolytes” to distance themselves from Ayn Rand -- a la House Speaker Paul Ryan, who cut and ran when, as Mitt Romney’s running mate, he was pushed on liking Rand.

“I reject her philosophy,” Ryan told National Review back in 2012. “It’s an atheist philosophy. It reduces human interactions down to mere contracts and it is antithetical to my worldview.”

Rather than simply saying he disagreed with Rand on theology but loved her defense of free-markets, Ryan offered a blanket denouncement of the woman and her philosophy -- even though for years he’d recommended the book to congressional office interns and even keynoted at The Atlas Society’s 2005 celebration of Rand’s 100th birthday on Capitol Hill.

Ryan’s shameful desertion of the gal who brought him to the liberty ball may be why liberals think they can use any Rand-connection to tarnish Trump advisors and nominees.

So what does the Trump camp think of Ayn Rand?

Let’s start with Trump. In an April 2016 interview with Kirsten Powers, Trump said of The Fountainhead, “It relates to business … beauty … life and inner emotions. That book relates to … everything.”

This hardly makes him an “acolyte,” much less an Objectivist. Conflating a literary liking for Ayn Rand with status as an objectivist -- i.e. a follower of her highly developed philosophy, encompassing detailed descriptions of metaphysics, epistemology, ethics, politics and aesthetics -- is one common mistake that has got to go.

Equally obvious is the fact that Trump has consistently defied and rejected labels. He is a pragmatist, not an ideologue. He’s even changed his party affiliation five times. Trump, a builder of buildings, would certainly appreciate a hero who also builds buildings. He’s also a businessman, who needs to deal with facts, numbers, negotiations, deadlines, and deals. He’s had to prioritize, innovate, adapt -- and for that the market has rewarded him well.

Yet, as others have pointed out, Rand would oppose many of Trump’s policies -- from restrictions on free trade to his endorsement of eminent domain takings of private property.

What of the other “fellow objectivists” with whom Hohmann claims Trump “stacks his cabinet”?

Well, the only actual self-described Objectivist mentioned in the article, John Allison, is reportedly under consideration to chair the Federal Reserve.

Former BB&T bank chair John Allison has been a major supporter of the Ayn Rand Institute. He has helped set up university chairs on the morality of capitalism, with Ayn Rand’s view front and center. And he served for two years as president of the libertarian Cato Institute.

As a former bank CEO, the Ayn Rand character Allison might superficially seem to most resemble is Michael Mulligan -- a wealthy banker who took “Midas” as his moniker when the press tried to mock him for his materialism. As with many of the scenarios which Rand’s fiction anticipated, Mulligan was ordered by the courts to lend money to incompetent applicants -- the real life consequences of which Allison described in his book The Financial Crisis and the Free Market Cure.

But unlike Mulligan -- and other heroes of Atlas Shrugged who withdrew from the world into Galt’s Gulch to avoid extending what Rand called the “sanction of the victim” -- Alison hasn’t withdrawn. He’s been actively involved with his community, both locally and nationally, published books, and now seems poised to enter a new chapter of public service.

He even owns an original signed copy of The Fountainhead. As I wrote of our exchange in the Wall Street Journal, Puzder feels at peace with both his Catholicism and his admiration of Ayn Rand.

“I encouraged my six children to read both Fountainhead and Mere Christianity by C.S. Lewis,” he told me over lunch in Santa Barbara last year. Each child later read Atlas Shrugged. Mr. Puzder argued that “there’s no contradiction between raising my children in the church, and urging them to lead the kind of lives of achievement, integrity and independence that Ayn Rand celebrated in her novels.”

But what of the other so-called Rand “acolytes” surrounding Trump? Have Rand defenders -- or detractors -- more to fear? Try this trivia question on to find out.

“My philosophy is to make money. If I can drill and make money, then that’s what I want to do.” Who said it, ExxonMobil CEO Rex Tillerson, or Atlas Shrugged’s Ellis Wyatt, of Wyatt Oil?

Tillerson’s main qualification as “objectivist” in Hohmann’s accounting is having listed Atlas Shrugged as his favorite book in a 2008 feature for Scouting Magazine. While his office didn’t respond to queries for elaboration, one can speculate that the oilman identified with Wyatt’s experience with government regulations and persecutions. He also likely admired the legendary oilman of Atlas Shrugged for reviving the economy by pioneering drilling innovations that anticipated fracking by half a century.

“We need U.S. energy companies that have the scale and financial strength to make investments, undertake the risk and develop the new technologies,” Tillerson has said.

Tillerson as an individual engages in private charity. He is a practicing Protestant and headed the Boy Scouts of America. But in these efforts, he was closer to the libertarian views of Rand than to the hot buttons of the religious right. For example, he pushed to allow gays in the Scouts and Exxon contributed to Planned Parenthood. But in his “make money” attitudes, he’s rejecting the “give back” language of many CEOs who allow themselves to be guilt-tripped by the “corporate social responsibility” dogma and rhetoric, that the purpose of a business is to “serve society” in some way other than providing goods and services to eager customers.

Rep. Mike Pompeo, Trump’s hopeful for CIA chief, said: “One of the very first serious books I read when I was growing up was Atlas Shrugged, and it really had an impact on me.”

He also penned a piece entitled “We Need Capitalism, Not Cronyism.” In it he makes the distinction that is at the heart of Atlas Shrugged. Pompeo has been a crusader against Congressional earmarks, that is, handouts to the politically connected -- or politically correct, witness his war on wind power tax credits, and other supposedly eco-friendly energy subsidies.

Does the all of this add up to an Ayn Rand moment?

Ray Dalio, the CEO of Bridgewater Associates, recently reflected on the coming Trump administration. “Regarding economics, if you haven’t read Ayn Rand lately, I suggest that you do.” He noted that Rand’s “books pretty well capture the mindset. This new administration hates weak, unproductive, socialist people and policies, and it admires strong, can-do, profit makers.”

An Ayn Rand moment? Half of you reading will probably ask, “Who cares?” The other half, I suspect, will answer, “I do.”

And if you do, as do I, let’s break up the circular firing squad of true Rand “acolytes.” And here I do intend the adjective in the literal sense of the word.

Let us find more areas of agreement. Let us welcome the Rand-friendly and Rand-curious -- without purity tests and loyalty oaths. Let us prioritize, and recognize that the problem of too few ideologically consistent Objectivists is dwarfed by the problem, and opportunity, of too few people reading Ayn Rand. And let us join -- with libertarians, religionists, Trump and Hillary voters alike, to introduce more people to the literature of Ayn Rand, which has been an activator for so many to delve deeper into learning more about economic and political liberty.

Jennifer Anju Grossman is the CEO of the Atlas Society.