I along with many others do not believe that you are like many media want to describe you; heartless and cold and that you lack compassion for immigrants.I actually think you're real concerned about helping most people to a better life. I think you're real concerned about how we want our society in Norway should be for Norwegians in about 50 years or more ....Norway is a small country with a welfare model that we have built up over generations.

People have been engaged, worked, paid taxes, all in the spirit of "do your duty - demand your rights."It has taken generations to build our interwoven communities, large and small, with shops, businesses and more or less urban infrastructure. But it takes only a couple of decades of uncontrolled immigration to destroy the wonderful country we have built. This, Sylvi has understood.

We now have a nation where many people no longer have confidence that the current authorities are able to exercise the state's oldest and largest duty: To protect the safety of citizens - not only now, but also in about 50 years and on-wards into the future.KrF leader Knut Arild Hareide believes Sylvi Listhaug (FRP) is a bigger problem for integration than the cash benefits she is now suggesting to remove. What Hareide does not understand is that many immigrant women get well paid to be home with their kids.

They may be in a situation where women can not speak our language,unable to contribute,which is an obstacle to better integration. Moreover, the children stayed home with Mom and don´t learn the Norwegian language or Norwegian culture. For several of these women, the situation is also that they get many children, one after the other, and thus staying home for many years and live only on cash benefits.

The media goes along with most of the politicians in Parliament to gag and ridicule Sylvi Listhaug. She is in my eyes the minister who works absolute best for the future of Norway. She is the only one that has a clear voice, showing responsibility, are forward-looking and energetic when it comes to immigration. By the NRK media, unfortunately,she is presented very badly. They invited Listhaug to a debate - where she was alone against seven opponents and broadcaster, but Sylvi faced them all with excellence.

Immigration consists mainly of young Muslim men who leave their homeland in search of a comfortable existence with us. According to Imams and the Koran, Islam will eventually take over world domination and form a world caliphate. This is proclaimed by the Imams themselves.These young Muslim men are mainly men who overrun us Europeans on public transportation, at a football match or a concert.

And it is mainly young Muslim men among us,who gropes women in herds.The terrorism, burning of cars, rapes and violence these perform increases and confirms time after time for everybody that Islam does not mean peace, only trouble for Europe, and lasting change in Europe. It should not have been necessary with so much proof before we react.

It's amazing what even fraud and misdirection by politicians and media have resorted to in order to turn a blind eye. But a growing number of Europeans now have seen it with their own eyes:

Despite the fact that individual Muslims can of course possess brilliant qualities, there is nothing advantageous about Muslim mass immigration. Muslim mass immigration is contrary and tantamount to mass discomfort, affecting everything from public safety and public finances, deteriorated communities (ghettos) and poorer relationships with native citizens.

The increasing impact of immigration of young Muslim men pose a threat to the social stability in several European countries. 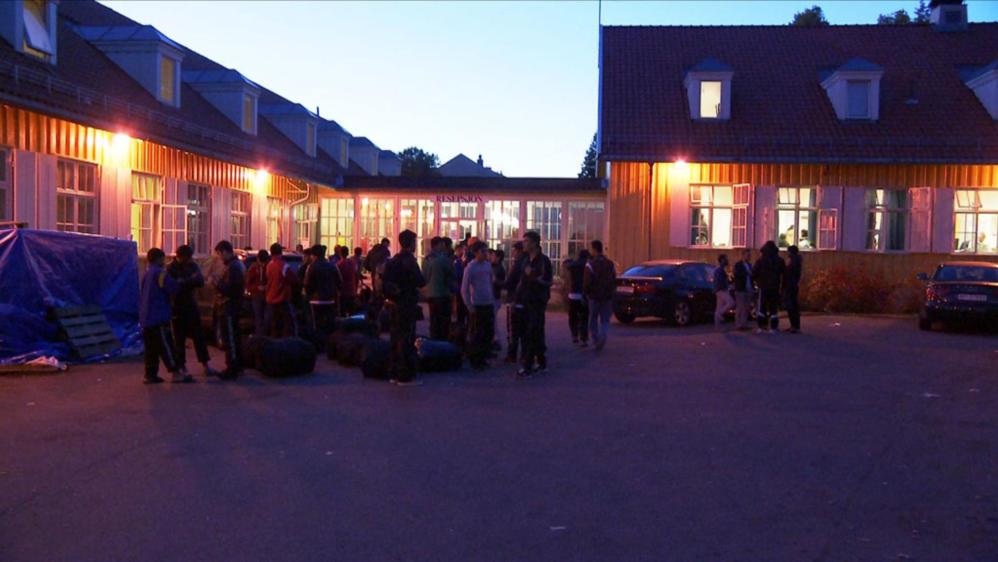 All history shows that Islam brings poverty, oppression and violence wherever in the world they establish themselves. Also in their country of origin. For Europe to survive as a prosperous and peaceful society, Islam must be banned and all mosques closed.

Norway need better and more knowledgeable people in the media and in parliament than at the present.

The majority in the current Parliament promotes policies that weakens Norway. Very many of the governments in Europe are now in agreement that immigration is EU's biggest challenge.

There is no shortage of proposals for what is needed to stop immigration, but there is a lack of concerted action, understanding and solidarity. In North Africa awaits an estimated 300,000 people for an opportunity to cross over to Europe.

The question that arises: Who finances this guide distributed to migrants and those associations that help them? The name of Georges Soros is frequently cited.
http://news.sky.com/story/1551853/sky-finds-handbook-for-eu-bound-migrants

Malta, which currently holds EU presidency, says the number of smuggled migrants and refugees are expected to be record high this year.

The migrants come from many African countries, especially in sub-Saharan and Libya which serves as a transit countries on the journey towards Italy. Austria's president says it's estimated 15 million immigrants to Europe over the next four years.

This means disaster. Much is said about breaking up smuggling networks and save lives at sea. But no one is in doubt that the overriding goal is to reduce the flow of migrants to Europe.

One of the more controversial proposals that have been launched are sending migrants back to camps in Africa, under the supervision of UN agencies. From there they will be able to apply for asylum.

Humanitarian organizations are of course protesting against this. Liberal and leftist politicians believe it is inhumane and cynical.In Libya's chaos criminal smuggling networks can operate with its billion dollar industry.

Plans to return migrants to "safe places" may conflict with the EU's international obligations. People should not be sent back to death. EU face many demanding negotiations. They have as yet not even agreed on how the burden should be distributed.

Border controls are now about to be restored in the border-less Schengen. Italy and Greece are sitting almost alone with the responsibility for hundreds of thousands of people in need.There is little mention of the fact that the increase in population here on Mother Earth is explosive ..

We are 76-80 million more per. years, and we have in 85 years increased from 2 billion to 7.4 billion people. Negative consequences of people increase causes: More than 1 billion people go hungry every day directly. Around 1.1 billion people now live for $ 1 per. day and 2.7 billion live for $ 2 per. day.

Of all the urban dwellers in the world today, about 40% live in pure slums. This is an "unworthy" way of life, high crime rate,resolution of family ties, poor water supplies, poor sanitation, lack of food and little evidence of education.

With the increase of the world population the present problems will only escalate! Is it the opinion that everyone should have their own job, own house, transportation, enough food and clean water every day? The question must be asked of both politicians, the media, the individual householder / mother and the government of the various nations.

People know little about this because the media or politicians will talk about this. Or is it that people do not care?

The underlying cause of this population increase is the combination of biology and brutal selfishness. Biology is the for all species inherent propagation urge. Historically, there have always been produced more offspring than sustainable. We all know how strong sex drive is.

The gross egotism is that we humans insist that everyone should get as much growth as they want, and that nature (the environment) must adapt to all the requirements of this leads to - because, as politicians and leaders like Erdugan says: To this aim we have the right and claim because we are human beings. As such, we act as very ignorant, unruly egoists.

I hereby give my full support to Sylvi Listhaug which I think does a remarkably good job as immigration minister, and whom I believe should have been supported and defended more by his colleagues in government.

It is very sad to see how the press and left extremist elements here in the community freely allows Listhaug to be daily attacked without any reactions from her colleagues in government.

It looks as though the press in this country has lost all contact with the real world, and therefore they are unable to distinguish what is constructive criticism of policies Listhaug is set to implement in society, and what can only be regarded as personal attacks on her.

We will collectively give Sylvi Listhaug our support by going to her Facebook page and leave a nice comment.

I also give my FULL support to Sylvi Listhaug for her courage and tenacity in this VERY difficult situation,not only for Norway, but for Europe and the USA, where I also give my FULL support to PM Theresa May in the UK, and to President Donald Trump in the USA, who are both facing the same global elite,the cause of the mass invasion of predominantly Muslims people, in order to create chaos and division in our world.