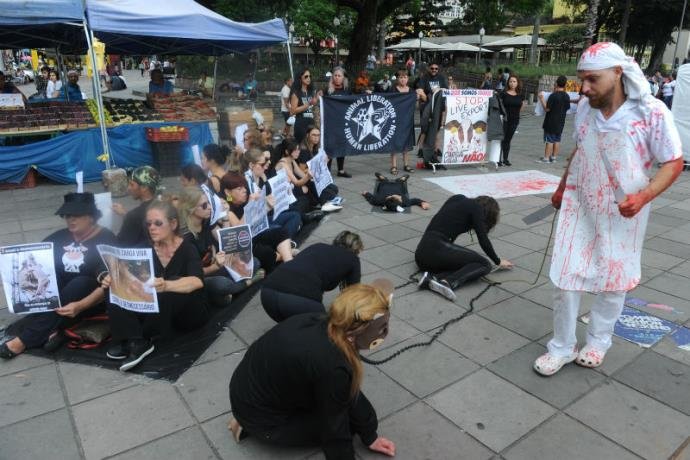 Entities protest in Porto Alegre against transport of live animals

Demonstration brought together dozens of people in the City Center


A number of animal rights activists gathered and staged a protest earlier this Saturday against the transport of live animals on ships. The demonstration, which gathered dozens, took place in Largo Glênio Peres, in the centre of Porto Alegre. All demonstrators wore black, mourning, by Justice's decision released all the export of live cattle from Brazil in early February, allowing a transport of more than 25 thousand live cattle to Turkey. The ship that took 16 days to reach the Euro-Asian country, left the port of Santos, in São Paulo.

Those who passed by could observe several posters about the export of live cargo, considered by the activists as a "cruel and unnecessary" action. In addition to the posters, one group also demonstrated through a play how the cattle are treated during these transports. According to one of the organizers of the protest and member of the organization Activists United, Activism Vegan (Atu Ativeg), Juliana Coube, the event is worldwide and even happened in Turkey.

"These lives are imported from here, circumventing and circumventing all animal welfare laws and, since there is legislation, it has to be fulfilled." This has not happened, our aim is to awaken society to what is happening, "he said. According to Juliana, the entities want this type of transport to be banned by Justice. "We do not agree with any slaughter, we know that there is no alternative with less suffering for the animals, because they are sentient, that is, they are able to feel sensations and feelings in a conscious way), abroad the animals are dying of the worst forms, is very different from what is done in Brazil, "he said.

For the director general of the Abolitionist Vanguard, Marcio de Almeida Bueno, it is necessary to take to the population an "opinion allied with information". "Most people are unaware of a number of issues of so-called non-human animal exploitation, which is what we have been denouncing for some time, but now it has culminated in the issue that occurred in Santos," he said. According to him, this is the time to question whether cruelty should occur. "If it were a dog it would be a crime, if it was a panda it would be horrible, but if it is a cattle, that's okay. Animals can not wait," he said.

According to the Ministry of Agriculture, Livestock and Food Supply, agribusiness exports reached $ 6.16 billion in January this year, up 4.9% from $ 5.87 billion a year ago last year.


_**Ecoporto Santos** says it will appeal and was surprised by the fine, "because it understands that the operation was carried out in strict compliance with the laws that regulate this modality of operation."_

Three other cases are expected to continue in the coming months, putting livestock exports under the scrutiny of justice.

"We do not want to destroy the economy, we want just a little respect for animals," says lawyer Leticia Filpim, vice president of Abra (Brazilian Association of Lawyers Animalists).

For the biologist Frank Alarcón, the exports in great quantity hurt the rights of the animals. "Not to mention environmental issues, because waste is thrown into the sea, there are ethical points: you submit animals of complex cognition to enclosures in tiny, dirty places, and make sea voyages for weeks," he says, which is part of the Animal Party. "Animals are exposed to storms and intense heat. There is nothing to ameliorate this suffering."

Michel Alaby of the Arab Brazilian Chamber of Commerce says data from the buying countries indicate that 3% of the animals arrive dead at the destination.

The legal war does not scare Ricardo Pereira Barbosa, of the association of exporters. "We've been doing this for 20 years now because the market has grown by 42%," he said, citing state representatives who attended the rallies.

He adds: "We will talk to the government to improve legislation, but even with protest, and complaints, sales will continue."

_Demonstrations in Rio against the export of live animals_

EXPORT OF LIVE ANIMALS IS CRUELTY 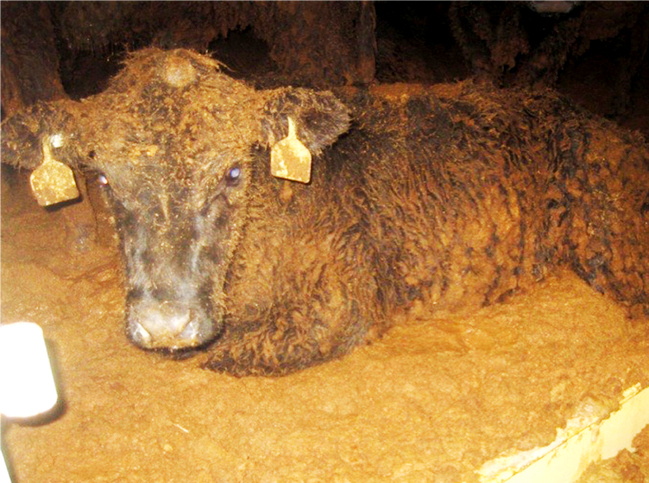 My father had a frozen meat plant. I have known the pain of slaughter since childhood. At the age of six, I was about to let go of the cattle, and I did so much that I was prohibited from going to work. Today, I fight all the cruelty committed against animals, including the terrible export of standing cattle.

In doing so, Mr Tarso Francisco Pires Teixeira, vice president of Farsul, in an article published on December 18 in this newspaper, questions my honesty when I expose the truth about how cattle are transported in the international trade of live animals.

In his text, he writes that the "boarding operation is done with rigid standards." Yes, on board the ship seems to be hygienic. But five days later, on the high seas, everything stinks and is contaminated, including food, which is processed. The soft surface of the field is a slippery floor, which causes exposed fractures. Cleaning is impractical.

There is also information that "the animal (...) has added technology in the treatment and preparation". Wonder what the deal or technology would be? Was the use of shock machines for handling on a 12-storey ship in which they were confined, without ventilation, without lighting, expelling their waste from floor to floor? The deal of being trampled to death?

I'm not alone in this fight!

Although Teixeira affirms that I take a stance against the progress of our State, I have as a company a network of foreign corporations, concerned with protective actions to the environment, national and international organizations and people who are against animal cruelty, which it happens, even today, in this business that he says saved the livestock industry in Rio Grande do Sul.

The "good management practices", which exalts the author, should not be only in the creation, but also in the destiny that is given to the animals, according to MAPA regulations. Agendas that I have promoted and participated carry reports that impact both the safety net and authorities. This reality had an impact on the Secretary of Agriculture, Livestock and Irrigation, Ernani Polo and the deputy governor of the State, also the creator, José Paulo Cairoli.

The sanitary organs of the country have the duty to accompany the exported live cargo, sentient beings that are, until their final destination, when they must be desensitized before slaughter. Laws, ordinances and decrees that establish measures of animal protection, since 1934, are not being fulfilled.

I hope that Farsul, with its indisputable representativeness, contributes to the truth about this barbarism, to demand changes in procedures and to provide clarification to society. The truth, even, few want to face. Learn more: https://www.forumanimal.org/gado-vivo