The "Rosenholz" files since their repatriation from the USA, the microfilmed files of the main administration Aufklãrung (HVA) of the MFS provide for discussion.

The "Rosenholz" files - since their repatriation from the US is the microfilmed files of the Central Administration Enforcement (HVA), the spy department of the Ministry of State Security (MfS), the subject of lively public discussions. What's up with these files? What insights arise from them? Which persons are included in them? Can Western spies of the Stasi be "unmasked"?

Since July 2003 the Rosenholz files are available for refurbishment. They are used in the authority of the BStU like other Stasi documents and included in the research. This results in new insights into the activities of the MfS in the "area of operations" - in other words, Stash jargon meant, in particular, Western countries abroad. CD with rosewood files Source: BStU

What goals the MfS pursued in the West, which people and methods it used and how successful it was, has not yet been sufficiently researched. There are only a few findings on the domestic network of H.V.A. The HV A files may support this research. Not least because they can point the way to relevant documents that could not previously be found or could not be assigned.

Spectacular revelations about persons of the public life of the former Federal Republic are not to be expected. The agency network of the MfS », which existed in the West in the late eighties, was largely uncovered years ago by the investigating authorities of the Federal Republic.

Since the release of these documents, it is also possible to investigate their nature and their significance. The scientists in the BStU authorities have already provided important findings. It was known, however, that some of the persons listed in the JH.V A-files were not unofficial employees (J.M) of M.f.S. Nonetheless, the figures available in the meantime are surprising: about 90 percent of the persons listed in the H.V.A files are those affected or third parties within the meaning of the Stasi Records Act.

Even the expectation that the persons included in the Rosenholz files are, above all, citizens of the old Federal Republic, is not true: The "fight against the enemy" was conducted beyond the borders, but also within the GDR. The domestic network of H.V. A was significantly larger than previously suspected.
The research on the western work of the State Security Service of the GDR is still an interesting and long-incomplete chapter - the Rosenholz files provide important building blocks.

Where does the name "Rosewood" come from?

In connection with the investigations into espionage for the MfS, since 1993 German authorities have been given the opportunity to use information from the HV A-file in America. This information was obtained from the Federal Office for the Protection of the Constitution under the name "Rosenholz". In the years that followed, the term "rosewood files" became established, causing misunderstandings - in fact, the data are essentially files and computer printouts, not files in the strict sense.

Will "Rosewood" be released?

MfS documents may be issued on the basis of the Stash Documents Act (StUG) for specific purposes, in particular for the processing of the activities of the State Security Service. The BStU authorities, therefore, do not publish the files, but they issue them on request in accordance with the legal provisions.

What can the documents be used for?

The rosewood files are part of the files in the archives of the BStU and serve primarily as archival finding aids. Like other files, they are often but also part of the documents that are published at the request of individuals and institutions. The main uses are personal file inspections, information in connection with reviews and applications of scientists and journalists dealing with MfS reclamation.

Are there checks on the basis of "rosewood"?

Depending on the legal situation, it is the parliaments or the individual parliamentarians or the institutions that decide on their employees. The BStU may not initiate any checks on its own. In the case of a review, all documents available in the archive must always be included; a search only in the HVA files is neither permissible nor useful.

In the winter of 1989/90, the HV A secured a special right: while all the other departments were disbanded in January 1990, the HVA was operating until June 1 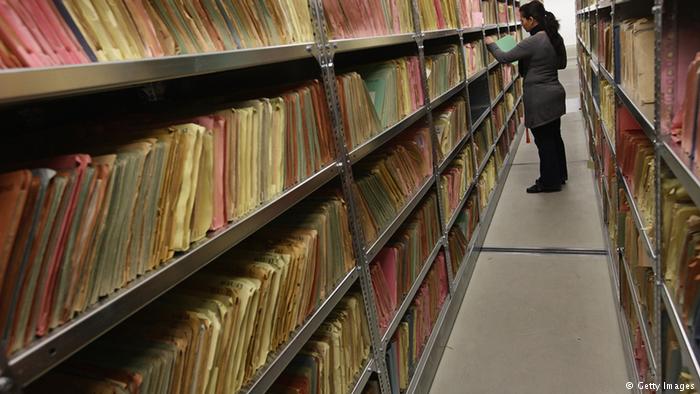 She used the opportunity and destroyed her archive almost completely. The index cards of the HV A were also removed from the central person card of the MfS. Above all, the information of the HV A, with which they informed the SED leadership about their findings, was left over. Documents were also kept in some district administrations: in Leipzig, the citizens' committee prevented the destruction of the documents, in Gera, there were bags of torn documents, Many HVA documents are in the possession of other Stash divisions to which they were directed by HV A for various reasons.

All in all, ten percent of the personal files were retained, according to rough estimates. Further information is contained in databases called SJ.RA (system of information retrieval of HV A). In 1998 it was possible to make these computerized tapes of the HVA legible again with a large number of allegedly deleted records. The SJ.RA data contains jj.a .. valuable information about the information received at the HVA and about its worldwide network of agents. The return of the Jim. A-FilesThe microfilmed HV A files microfilmed by the MfS got into the hands of the American secret service CJA on hitherto unknown routes. After years of efforts by the German government, the Americans began in 1999 to return copies of microfilms on CDs to Germany.

Until March 2003, the BStU 381 CD-ROM was handed over. The condition for the return was the classification as classified information, which was repealed in June 2003. Is there a possibility that the documents have been tampered with? In some cases, it can be shown that the American agency has used image editing software to improve the readability of digitized index cards. It sometimes came to changes in individual numbers or letters. There have not been any indications of any potential manipulation. In addition, comparisons with other documents make it possible to check the information contained in the facsimiles.

BStU - Die " Rosenholz "files investigations into espionage Since 1990, approximately 3,000 cases were investigated against citizens of the old Federal Republic for espionage in the service of the MfS, about half of them concerned unofficial employees (JM) of the JHV A in the West. In more than 360 cases, the investigations led to convictions. Prison sentences were imposed in 63 cases. Former GDR citizens, on the other hand, were only allowed to be prosecuted for espionage against the Federal Republic of Germany in exceptional cases after a decision by the Federal Constitutional Court in 1995. 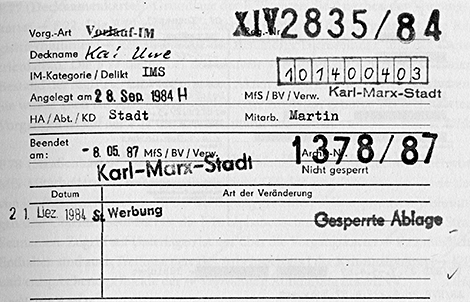 A total of 23 full-time employees of the GDR spy apparatus and other GDR citizens were convicted. In addition to espionage, they were accused of other crimes. For example, espionage chief Markus Wolf was condemned for allegiance to theft, deprivation of liberty and bodily harm. Some important figures The present JHV A files contain around 280,000 personal data from the entire HVA period up to the time of the filming in 1988. 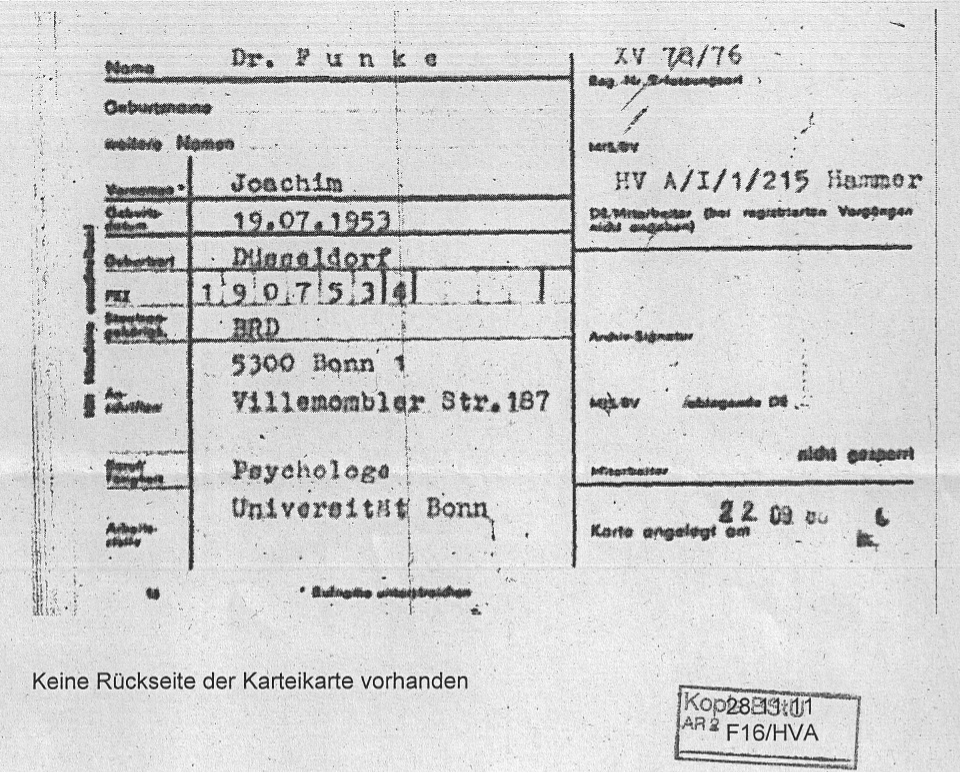 An extrapolation of those counted Allocations results: about 150,000 (54 percent) of which are attributable to German citizens and about 107,000 (38 percent) to citizens of the DDR (8 percent unassigned). Approximately 90 percent of this data is not JM of the MfS, but of persons who came from the environment of JM or for other reasons important to the MfS. Estimates have shown that around 6,000 Germans and more than 20,000 GDR citizens were actually registered as members of the JH.VA.

Only a part of it - about 1,500 in the West and 10,000 in the GDR - was still active in 1989. The HV A-files The so-called Rosenholz files are mostly micro-filmed files of the HV A. They are structured like other files of the MFS Anders is, however, these often have several people with a registration number. In many cases, this makes the identification of JM difficult or even impossible.

The Rosewood files consist of three different files: the F 16 files, the F 22 files and the statistics sheet. F 16 In the personal file the HV A recorded the data of persons who were of importance to them. For this purpose index cards were used, which were called internally form 16 (F 16). The F 16 contains the name and personal data of a person as well as a registration number, but not the reason for the registration. More than 90 percent of the entries in these F16 index cards do not affect JM - the term "agent card" is therefore misleading. Example of an F16 HVA tab - click on the green view Q

Source: BStU F22 The fact sheet for which Form 22 (F22) was used contains information on the category under which the persons listed were listed. The approximately 57,000 F 22 contain no clear names and personal data, but registration numbers which can be used to connect to the F 16. The F 22 gives the first indications of why HV A was interested in the persons belonging to a registration number Example of an F22 index card of the HVA - click to view the whole list Source: BStU

Die "Rosenholz" - FilesStatistikbôgenFor the exact function of the approximately 1,700 surviving statistics sheets in the archives of the BStU, according to the current state of research, only provisional information can be provided. The hitherto prevalent opinion that this is a "mobilization file" listing persons of very particular importance has not been confirmed. The statistics sheets available at the BStU refer to Germans who were registered as JM.

Example of an HVA Statistic Sheet - Click to view the Groft Source: BStUEin Statistic sheets summarizes various information about a JM. It does not contain the bourgeois name, but its code name, registration number and further characterizations such as motive for cooperation and beginning of unofficial cooperation. Together with the corresponding F 16 and F 22 files, the statistics sheets are important means of identifying persons.

■ Georg Herbstritt, Helmut Müller-Enbergs (ed.): The face to the West to ... GDR spying against the Federal Republic of Germany. Bremen 2003.

■ Joachim Lampe: Legal Review of the Western Espionage of the MfS. A preliminary assessment. In: BF informs, No. 24 (1999).

■ Helmut Müller-Enbergs: Unofficial employees of the Ministry of State Security, Part 2: Guidance for working with agents, scouts and spies in the Federal Republic of Germany. Berlin 1998.

■ Download: MfS Manual Hauotverwaltunq HV A Feedback on this article