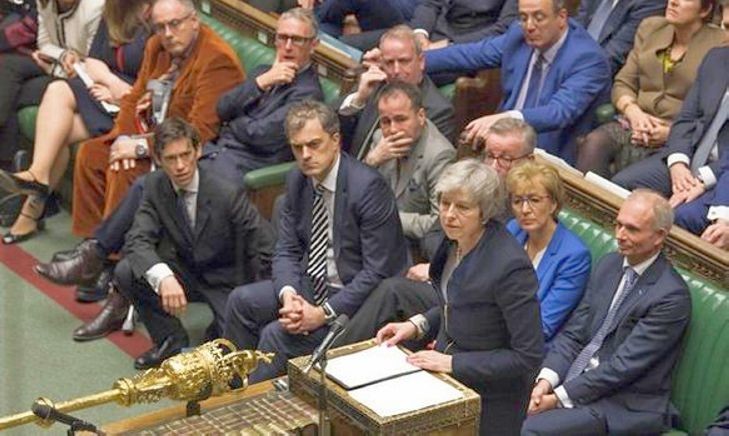 Theresa May at the Despatch Box in the Commons (Image: UK Parliament/Jessica Taylor)

It was "a very simple, in-or-out choice," said then prime minister David Cameron in January 2013 when he first launched the Tories' referendum policy.

The result in 2016 was equally clear.

By a decisive majority, the public backed Britain's departure and the return of national independence from Brussels rule.

Yet in response to this direct instruction from 17.4 million voters, our politicians have made a complete hash of the withdrawal process, so much so that Brexit itself is in real danger.

For more than two years the ruling elite has dithered, prevaricated, squabbled and pontificated, despite pleas from the increasingly frustrated public for them to focus on their duty of implementing the referendum verdict.

In the process, the move towards our national liberation has been dragged down into the quagmire of retreat.

It is a failure of statecraft on an epic scale, a betrayal of millions who only want Britain to become a self-governing nation once again.

Instead of working together for the goal of British freedom, too many in the political establishment have indulged in continual intrigues, putting their own vanity before the will of the people.

It is this self-indulgence that has brought about the explosive political crisis which now engulfs Westminster.

In dramatic scenes at the Commons on Tuesday night, the Prime Minister's Withdrawal Agreement was overwhelmingly rejected by 230 votes, by far the biggest Government defeat in the history of parliamentary democracy.

Incredibly, 63 percent of Conservative backbenchers voted against the deal.

In the subsequent turmoil, it is unclear what will happen next but there is a real possibility that Brexit could be overturned by MPs, either through a second referendum or the repeal of Article 50, which is meant to enact Britain's withdrawal by March 29.

The chaos has led government supporters to heap the blame on the rebel Brexiteer MPs for their supposed irresponsibility.

In the Commons debate on Theresa May's deal, the Environment Secretary Michael Gove, who notoriously stabbed Boris Johnson in the back during the 2016 leadership contest, had the nerve to accuse the Eurosceptics of treachery towards their cause, claiming that they were about to squander "the best chance for a proper Brexit".

Attorney General Geoffrey Cox, another Leave supporter, went even further by telling his own backbenchers: "You are not children in the playground. You are legislators."

But this criticism is unjustified.

There is nothing reckless about wanting real British sovereignty or objecting to the Government's botched deal.

Brexit represents the natural instinct that a sovereign nation should be in charge of its own affairs rather than be ruled by a foreign power.

After all, that was the status of the United Kingdom for centuries until we were pushed into the European Economic Community by Edward Heath in 1973.

It is also the status of most of the earth's 167 nations outside the EU.

Nor was it wrong for Brexiteers to vote against the Government, for the Withdrawal Agreement is a barrier to real independence.

Not only has it the potential to lock Britain indefinitely into EU jurisdiction without any say, but it also required the payment of £39billion to Brussels without any clarity about our future trade relationship.

The Government bleated about "uncertainty" if the deal were rejected, but in truth, it provided no certainty at all, just the grim prospect of endless more rounds of talks, in which the EU would have no incentive to reach a proper deal.

One senior civil servant wrote that such talks would leave Britain "a permanent satellite state of the EU".

No, the culpability for the current mess should not be attached to the Brexiteers, who only want to see the referendum verdict enacted.

It lies with others, like the Government, whose entire negotiating strategy was far too defensive and unimaginative.

Just as reprehensible is Jeremy Corbyn's Labour front bench, whose stance has been based entirely on partisan advantage rather than any principle.

Inevitably, the intransigence of the EU has played its malign part, driven by Brussels' desire to punish Britain for daring to challenge its federalist ideology.

But the greatest fault belongs to the large army of Remainers in Parliament and the media. Unreconciled to the referendum outcome, they have constantly manoeuvred to reverse Brexit, whether by court cases, legislation or fearful propaganda.

Only this week Dominic Grieve, the passionate Europhile and keen advocate of a second referendum, called Brexit "the biggest mistake in our country's recent history" which MPs had "the ability" to "try to prevent".

It reveals a profound contempt for the British electorate.

But, like the Brussels empire it worships, the pro-EU brigade does not care about democracy.

It is now ready to exploit the Westminster crisis that it has ruthlessly helped to create.

The British people deserve better than this dangerous farce.