Hundreds Of Reindeer Killed By Mystery Lightning In Norway 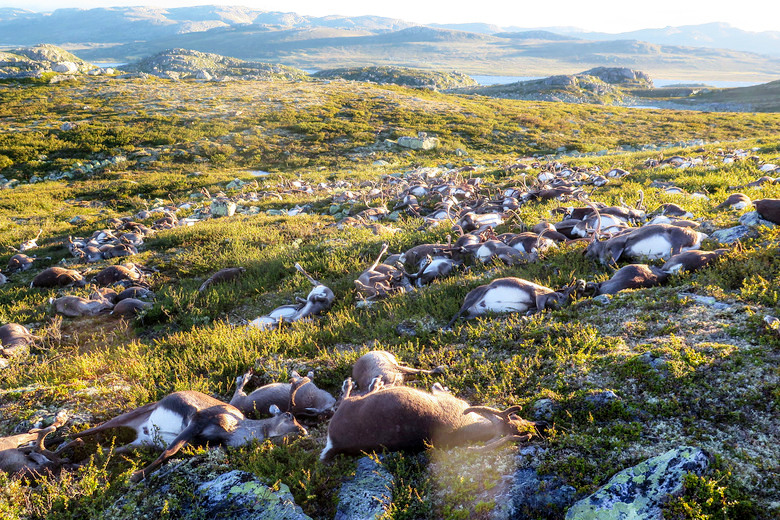 Jeff - As I've been saying, the Fukushima-caused Arctic ozone hole is enabling all sorts of electro-atmospheric effects. There is no blackened burnt grass in the photo. This is not normal cloud generated lightning, but more like a cosmic storm. If this continues, there goes the atmosphere and the Earth's electromagnetic shield. Same electro-atmospheric effects killed thousands of saiga deer in Siberia.

The 323 reindeer, including 70 young, were found on Friday by a gamekeeper on the Hardangervidda plateau, a national park where Europe's largest herd of some 10,000 wild reindeer roam freely. Television footage showed the animals' dead bodies lying close together on the ground.

"There were very strong storms in the area on Friday. The animals stay close together in bad weather and these ones were hit by lightning," an official from the Norwegian Environment Agency, Kjartan Knutsen, told AFP.

Reindeer are social creatures and usually move in packs. "It's unusual. We've never seen anything like this on this scale," Knutsen said.

Norwegian authorities have yet to decide what to do with the animals. "We're going to decide soon whether to let nature run its own course or whether we will do something," he said.

Of the 323 reindeer killed, five had to be put down due to their injuries. Thee are some 25,000 wild tundra reindeer in Norway, located in the southern mountain ranges, according to experts. -AFP

The reindeer deaths look to be an electro-shock, high energy but without conversion to heat (thermal power). The electric force is high but efficiently transferred between the atmosphere to the ground, and not a rebalancing or equalization of current between ground and air.

It could be called 'cold lightning' but it is not actually lighting from electrons moving in a vapor column. The air is dry, and so it is a jolt of energy from the upper atmosphere (like a sprite or a jet) moving down to the ground, caused by ionization of atmospheric gas atoms by gamma radiation.

It would be very serious if the phenomena is even more directly caused by radioactivity as a "gamma burst" - the death ray of sci-fi.

This could be at a relatively small scale a gamma ray burst when concentrations of radioactive isotopes in the atmosphere are bombarded by solar and cosmic radiation (Northern Lights). Here is an article that will further explain...

Did Deadly Gamma-Ray Burst Cause A Mass Extinction On Earth? 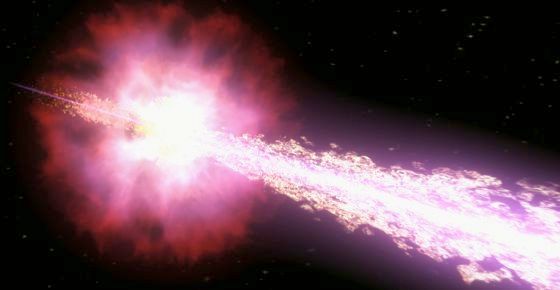 In this illustration, a jet is produced by an unusually bright gamma-ray burst.

A gamma-ray burst, the most powerful kind of explosion known in the universe, may have triggered a mass extinction on Earth within the past billion years, researchers say.

These deadly outbursts could help explain the so-called Fermi paradox, the seeming contradiction between the high chance of alien life and the lack of evidence for it, scientists added.

Gamma-ray bursts are brief, intense explosions of high-frequency electromagnetic radiation. These outbursts give off as much energy as the sun during its entire 10-billion-year lifetime in anywhere from milliseconds to minutes. Scientists think gamma-ray bursts may be caused by giant exploding stars known as hypernovas, or by collisions between pairs of dead stars known as neutron stars.

If a gamma-ray burst exploded within the Milky Way, it could wreak extraordinary havoc if it were pointed directly at Earth, even from thousands of light-years away. Although gamma rays would not penetrate Earth's atmosphere well enough to burn the ground, they would chemically damage the atmosphere, depleting the ozone layer that protects the planet from damaging ultraviolet rays that could trigger mass extinctions. It's also possible that gamma-ray bursts may spew out cosmic rays, which are high-energy particles that may create an experience similar to a nuclear explosion for those on the side of the Earth facing the explosion, causing radiation sickness.

To see how great a threat gamma-ray bursts might pose to Earth, researchers investigated how likely it was that such an explosion could have inflicted damage on the planet in the past.

Short gamma-ray bursts happen about five times more often than long ones. However, since these shorter bursts are weaker, the researchers found they had negligible life-threatening effects on Earth. They also calculated that gamma-ray bursts from galaxies outside the Milky Way probably pose no threat to Earth. 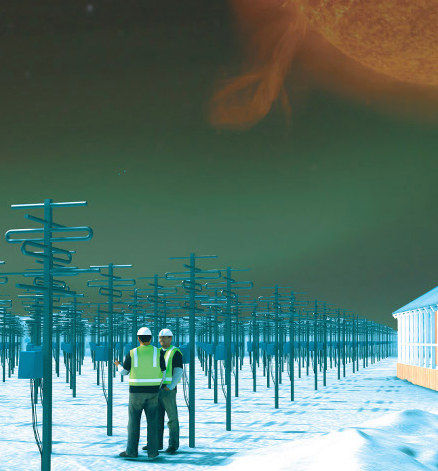 There is a massive HAARP array in Norway by the way. I would expect that was the cause. In fact it may have been the test of a new weapon to warn mother Russia not to mess with NATO.

EU has ordered another 6 HAARP farms in Norway.....

Is HAARP also the cause of the mystery sightings over White Sands - USA?