Even after ISIS takes responsibility, MSM fights to cover up Islamic link just like San Bernardino. Editor’s Note: Just like the Pulse nightclub massacre, the San Bernardino attack and the 2009 Ft. Hood shooting, the mainstream media is doing everything it can to cover up the connection between Islamic terrorism and major massacres on US soil.

Establishment reporters are even claiming it’s “fake news” that ISIS took responsibility for the attack – even though they did take responsibility for the attack. The following article reveals the dark triad of Antifa, Kurdish members of ISIS and anarcho-communists Kurds – and by implication why a country music festival – the bastion of flyover-country Americana – was targeted. For background, read this RELATED article first: FBI Source: Vegas Shooter Found with Antifa Literature, Photos Taken in the Middle East.

Members of Antifa are illegally crossing the Syrian border to receive military training from Kurdish militias as part of a dark triad between Antifa, anarcho-communist Kurds and Kurdish members of ISIS. The US-backed Kurdish People’s Protection Units (YPG) has anarcho-communist politics which has attracted American and European Antifa to fight alongside them in what they refer to as “the Rojava revolution.”

Security agencies are concerned that these Antifa members will continue the “revolution at home” once they return. Already FBI sources have revealed Antifa literature and photos taken in the Middle East which were found in the hotel room of suspected Las Vegas shooter Stephen Paddock.

In a policy that began under the Obama administration, the US military is providing weapons and training to YPG members, many of whom are directly linked to the PKK terrorist organization. This policy was wrapped under the guise of fighting ISIS, however, backing terrorists to fight terrorists hasn’t worked in the past. An uproar occurred when US special forces in Syria attached YPG insignia to their arms and the US military was accused of supporting terrorism, to which the Pentagon admitted wrongdoing and said the use of the insignia was unauthorized. As a result, the US military was forced to rebrand YPG as “Syrian Democratic Forces” (SDF) to provide plausible deniability.

The weapons and military training that the US military has provided them with are in turn being provided to western members of Antifa.These members of Antifa, along with the Kurds, have been constantly glorified in the mainstream media. Rolling Stone magazine interviewed several “western leftists” that are fighting in the YPG. And the fact that these anarcho-communist militias have ‘women who are fighting ISIS’ is something that is oft-repeated.

Antifa groups in Europe and North America have posted photos of their fighters holding up the Kurdish YPG-flag along with the Antifa flag in Syria. Now this group of militants is calling themselves the International Revolutionary People’s Guerilla Forces [IRPGF] and the vanguard “of the revolution” in Rojava who vow to fight capitalism all over the world. This is already happening as Antifa members were part of an armed demonstration in Phoenix, Arizona.

Kurdish military training is spreading to Antifa and other radical leftist groups in the West. One of the groups involved, the John Brown Gun Club, already glorifies the Kurdish YPG.

It’s plausible the photos from the Middle East that were found in the room of the Las Vegas shooter (along with Antifa literature) were photos of Antifa fighting alongside Kurds in Syria, and it’s also possible the shooter crossed into Syria to receive military training. Foreign fighters are able to legally fly to Turkey and then illegally cross into the Syrian border without being detected.

Germany is already reeling from a large population of Antifa, 1.2 million Kurdish immigrants and Kurdish militant groups working together in large numbers. Furthermore, thousands of Germans have illegally crossed into Syria to fight alongside Kurds, thus it’s no surprise when German Antifa gangs show up at right-wing rallies with hundreds of people and commit violent attacks. 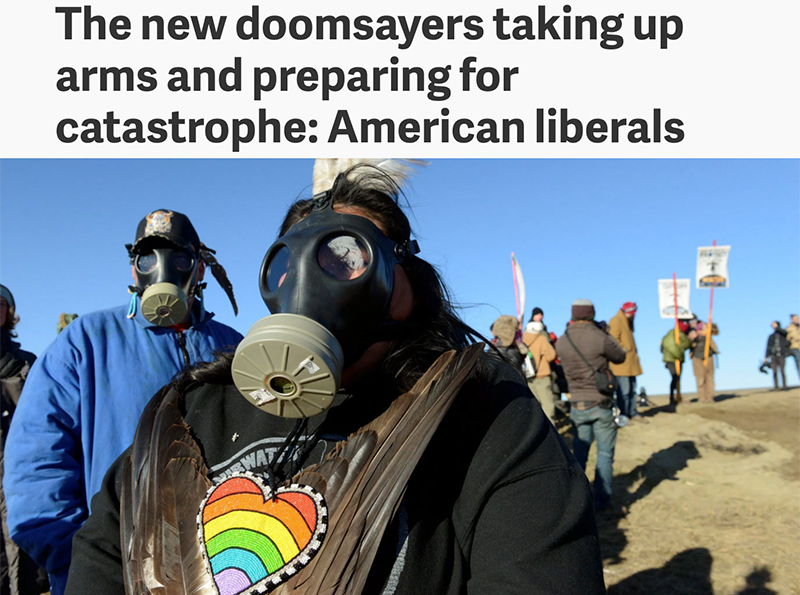 The media, however, continues to glorify Kurdish fighters as “the only people fighting ISIS” while ignoring the efforts of the Syrian and Russian governments.

This is mainly because the military-industrial complex had plans to balkanize Syria and Iraq, in the “project for a new Middle East” and they don’t care if they accomplish it using Islamic terrorists or Kurdish communists. The Kurdish militias are not much better than ISIS, nor as liberal and democratic as the media portrays them to be. In fact, the Kurds themselves are not one homogenous group, with the majority of Kurds being Sunni Muslims and some of them even joining ISIS.

In Iraqi Kurdistan, the percentage of female genital mutilation is around 70% while it’s zero in all other parts of the country. In fact, Iraqi Kurdistan, along with Yemen and Egypt, are the only areas of the Middle East where female genital mutilation is routinely performed. But even the communist YPG has been active at ethnically cleansing Christian Assyrians, Arabs and other minorities in the areas they deem the “Kurdish” state. Often times the areas they claim don’t even have a Kurdish population. Since the Kurdish population aren’t a majority in the areas Kurdish militias are trying to annex, they are carrying out these ethnic cleansings of non-Kurdish minorities in an attempt to achieve a demographic shift.

The YPG forcibly disarmed Assyrian Christian militias after assassinating their leader, David Jindo. In Iraq, the US-backed Kurdish militia Peshmerga forced Christian and Yazedi militias to disarm, before abandoning them to genocide once ISIS attacked. And the Kurdish regional government of Iraq is still not allowing these minority groups to return to their villages even though ISIS was pushed out two years ago.

The idea that Kurds deserve their own state is something that is being perpetually pushed by pro-war think tanks and liberal sympathizers; however, this pays little attention to the origin and history of the Kurdish people. For one thing, the word Kurd was a designator for Iranian nomads. Like many other nomadic groups such as Bedouins and gipsies, they cross borders tending to livestock. They typically cross through Iraq and Turkey following the Euphrates River and live mostly in mountains. 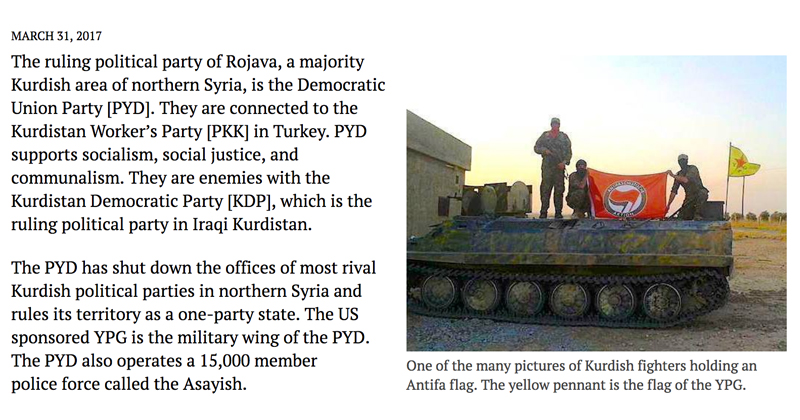 In 1915, the Turkish government promised Kurds the homes and cities of the Armenian Christians if they were to participate in the Armenian and Assyrian genocide. However after Kurds complied, Turkey reneged on the deal of giving them autonomy. The population of Kurds in north Syria resulted from multiple waves of illegal Kurdish immigration from Turkey after they failed to mount insurrections against the Turkish government. Many of these Kurdish were given refugee status by the Syrian government at the time, but now these same refugees are demanding their own state and are trying to claim ownership of much of Syria’s oil fields and are blocking the Syrian army from fighting east of the Euphrates.

This foreign policy of balkanizing Middle Eastern countries to create a Kurdistan may have explosive implications not just for the Middle East, but also for the West, as it breeds a new form of “Antifa resistance” as well as terrorism in the same way that ISIS was bred through US deep state foreign policy.

An increasingly complicated situation which can only be overcome by letting their own leaders emerge. It was a BIG mistake to remove the various dictators which HAD control over the people with fear, something the Western powers NEVER can duplicate.

Unfortunately, the ´powers that be´ are using the many different factions like pawns in their chess-game for eventual control of Iran and Syria.

Most of the multitudes of different interpretations of the Koran have consisted of warring tribes for centuries, who do not work or create anything for their communities. History shows they have tried to conquer Europe 3 times in the past, as well as many other local wars. They are not going to be pacified overnight, especially not by any Western power which does not understand their way of thinking.